How I came to write Pim
People often ask how I came to write Pim. It seems like a thousand years since I discovered Pim, or that Pim discovered me. Thankfully I kept detailed notes and saved photos from that time. While I can’t swear to the absolute accuracy of what you are about to read, I have done my best to capture the essence of how Pim entered my life.

Mr. Starbuck was granted an inadvertent reprieve when Millicent Pinchbeck and the Well-Dressed Albatross fell suddenly and inexplicably in love.

Arriving at the 86th floor Brad was once again greeted by Ukifune, who announced that they had a different job for him than they’d discussed earlier. Unbeknownst to Brad, Millicent had followed him, and lurked.

Awaiting the ferry that would take him to an interview for a job scrubbing down dog kennels with hand-sanitizer, Brad struck up a conversation with Millicent Pinchbeck. She grew attentive when he spoke of his acquaintanceship with Mr. Starbuck.

In her youth, working as a bounty hunter, Millicent Pinchbeck had once captured Uncle Thales; luring him with a dating app and then delivering him to the authorities for tax evasion. Today, while questioning Thales’ nephew about Mr. Starbuck, she didn’t even sit down. 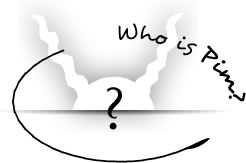